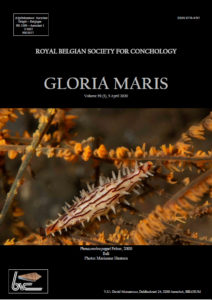 As a member of the Royal Belgian Society for Conchology, you receive our scientific magazine “Gloria Maris”. This is included in your membership fee.

Gloria Maris is well known within Belgium as well as abroad. It is exchanged with, or sent to museums, scientific organisations, universities and societies worldwide.

Do you also have an idea for a message or (scientific) article?

Gloria Maris contains 2 parts: a scientific part and a part about us as a club. Anyone can enter articles or messages for one of the two parts – or both … why not?

You have an idea? Pick up your pen and send it to our editors David or Albert.

Scientific idea? Then you might want to read our Tips & tricks.

Not yet a member but you would like to check the database anyway? That is possible. Would you like to order a copy – whether you are a member or not – then just contact our editors.

Go you get Gloria Maris as a member but are you looking from an issue from before your membership?
You are not a member but you are looking for a specific issue for your research?

No problem. Loose issues or volumes are still available !
HOW? Contact David or Albert with the details of your query.
Please take following cost into consideration:

Looking for more than an entire volume? Contact us quickly and we’ll see what we can do for the price relative to the query.

Eversince the foundation of the Society in 1961, a magazine is issued for the members bearing the name “Gloria Maris”. The magazine has evolved drastically over the years. Untill 1986 the magazine was issued as stencil. Next to scientific content, it also contained general information on shells, shell families, short messages, travel reports, … etc.

Since 1986, Volume 25, the magazine is printed. Every volume consisted of 6 issues with articles of high scientific value and content. Afterward, this was adapted to 4 issues per year.

What does the content look like?
– revisions of shell families
– descriptions of new species
– Inventories of molluscan fauna of specific regions..

Mostly, the articles are issued in English, but other languages are accepted as well. The latter by preference with synopsis in English. The second part about the life at the Society is mostly in Dutch.